Some people may have picked up on the fact that I’m a Spurs (that’s Tottenham Hotspur Football Club) fan, and that of late, we’ve got a new manager and REALLY started playing well – taking points off 3 of the top 4 clubs in the Premiership and last night our glorious honeymoon with ‘Arry continued with a 4-2 tonking of Liverpool in the Carling Cup.

I must admit, when I first saw the line up, I thought “Ah, he doesn’t care too much about this competition – he’s saving players for the league game at Fulham on Saturday.”

How wrong could I be?

From the kick off it was plain to see this was going to be a strongly contested game – Spurs however, played Liverpool off the park in the first half, going in at the break 3-0 up.

At this point I picked up the Indian meal I’d ordered and hot-footed it to Harriett’s (a thank you for her help), where I watched the second half (I DID miss 2 goals though – turning on the TV at 4-2).

It’s never good to see any footballer lying on the ground apparently knocked out, and the applause from all the fans at the match showed this, when , after almost 10 minutes treatment on the pitch, the Spurs goalkeeper Gomes was finally taken off the pitch having apparently swallowed his tongue. 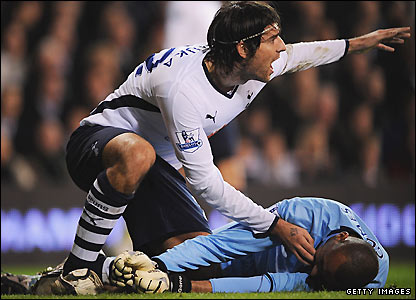 The only sign of negativity in Spurs’ game was after 96 minutes (9 minutes exra time due to Gomes’ injury), we kept the ball in the corner to wind the clock down.

2 goals from Pavlyuchenko, another 2 from Campbell, an absolutely stunning display from the whole of the team, means we’re in the hat for the quarter final – is it too soon to be thinking we might actually retain the trophy?

When Spurs play like they can, they play the most beautiful game – the opening 10 minutes last night showed we have no reason to be afraid ofd the top teams – it’s only a matter of time before we’re up there with them.

One thought on “Happy birthday Liam”

Leave a Reply to Me Cancel reply