Yes, it’s been a long time…yes, I’ve been busy…yes, it did involve technical things (or ‘magic black boxes’ as Lisa calls them).

So, deciding the 500MB external hard drive wasn’t big enough for the collection of films/TV shows I’ve recorded legally, I found the Zyxel NSA310 to quadruple my storage capacity with the added bonus of  having a bittorrent client (whatever THAT is…) built in, ditto FTP server. It acts as a media sharer too – which is nice.

So, all music, TV, films etc were shoved onto this and streamed via DLNA to my laptop (Acer Aspire 5920 seeing as you ask), and then onto the TV via S-Video/VGA/HDMI lead.

Of course, this wasn’t NEARLY technical enough for me, so I started looking into getting a PS3 to use as a media centre (bonus – it plays Bluray).

This was just before shitmas, so it was (kinda) put on the back burner as a project ‘in works’. In the meantime, I spotted the rarely used Wii console, put the homebrew channel on that and installed mplayer-ce to watch/listen to my media content.

It worked! and played every file format I had films for, with the only downside being the horrible Wii controller, and the fact it only played up to 720p resolution – I really wanted a PS3 to try out.

Managed to borrow one for the weekend from Lisa’s nephew (thanks Jake!), and the first thing that struck me was the resolution – up to 1080p 🙂 It failed to recognise some file formats though so was mentally put down the queue of media players.

That same weekend I was surfing (as you do on a cold Sunday when you can’t be bothered to goto the pub), and came across this little baby: 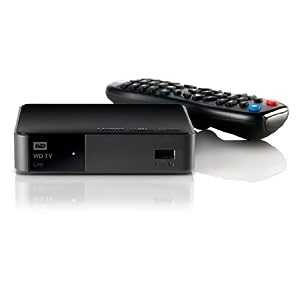 It’s the Western Digital TV Live Streaming Media Player (aka: ‘magic black box with fewer lights on the front’). I bought one and now have an awesome setup where I can flick through my films and get an info page like this:

Of course, my info is in English 🙂

It has taken some time to get JUST right, but I’m happy now 🙂

As a footnote – getting a NAS share working with moviesheets to show the info was a bit of a hurdle, but worth it.

And that, your honour, is what I’ve been up to rather than blogging – I throw myself on the mercy of the court.