Heh – see what I did there?

Here in the UK, we have a whole network of cycle paths, so lycra wearing (*shudder*) blobs can cycle (and sweat) in relative safety from regular road users. 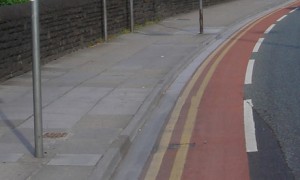 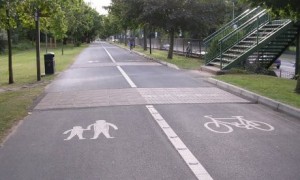 It makes me smile when I recall, as a child, being told stopped by a copper when riding my bike on the path, and being told to walk with it on the footpath – now people are encouraged to do this…

Anyhoo, there is nothing that makes me more annoyed (well, ok, maybe there is), than a twat on his bike on the road, holding me and other car drivers back, when there’s a perfectly good (and empty!) cycle path similar to the second picture only yards to his left.

So I propose that cyclists who fail to use cycle paths should be fined – or shot.

A thrilling final day to the season saw Spurs win 2-0 at home to Fulham, but Arsenal beat West Brom away to secure third place – Spurs rely on Chelsea NOT winning the Champion’s League final against Bayern Munich in order to qualify for the competition next year…

One thought on “Cycle paths turn me into a psychopath…”